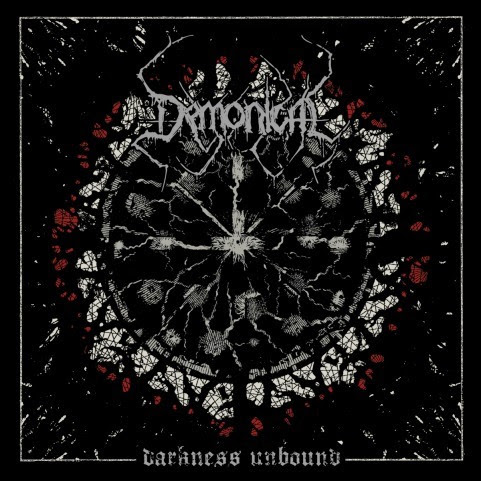 Here we are to present and review one of the best death metal albums of 2013, it goes by the title of "Darkness Unbound" and it has been unleashed by the Swedish death metal battalion Demonical.
Their new album is an authentic brutal "Deathcharge" upon the listener's ears! These guys can't stop impressing their fans, building up death metal masterpieces one after the other. "Darkness Unbound" is an absolute must have album for fans of bands such as Grave, Facebreaker, Dismember, Unleashed, Bolt-Thrower, Devian, Necrophobic and many more!
Demonical reveal to us in every release some of the most powerful and straight forwards death metal, all with a very own old-school vibe and identity! "Darkness Unbound" blends both, aggressive fast and tempered death metal in an absolute elite level, forging now and again, another death metal Colossal Beast!

Unleashed and untamed the pestilent Demonical creature ravages the weaker of mind... raise your own head and inhale the hell unleashed, breathe the true Darkness Unbound!

Here goes the Tracklist for the album: 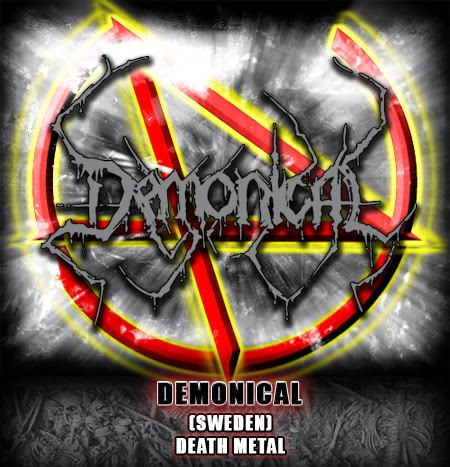 "(...)Children rejoice to hear His voice
Burn throughout this world
Our Devil's rebirth
The Darkness calls and we will answer
Loyal sons to the wicked ones
Raising hammers and unholy banners
Leading ammo into hungry guns
No victory without destruction
No victory while they still live
Unholy beast demands bloodshed
Gladly we raise the hammer once again(...)" Hellfire Empire - Darkness Unbound

The Band:
Demonical have been spawned upon this world in March 2006 by former Centinex members Johan Jansson (guitars & vocals), Martin Schulman (bass) and Ronnie Bergerståhl (drums), this with the mission to return to the roots of death metal and deliver to the metal world a sheer dose of darkness and brutality!
Since the debut full length "Servants of the Unlight" the band has been unleashing hell upon the death metal world, incinerating stages worldwide one after the other with their old-school death metal artillery! Demoncal are an ever-growing band, true to their death metal roots, playing some of the best death metal I heard these days! Uncompromised and straight forwards, their death metal battalion aims to invade your ears with such delightful brutality!
With the arrival of the current frontman, no other than Sverker “Widda” Widgren (Centinex, Diabolical, etc.) in March 2008 the band was at their full-force and ready to conquer the world with their enraged old-school death metal!
Demonical are a fearsome and addicting "must-listen-to" band for fans of Grave, Facebreaker, Dismember, Unleashed, Bolt-Thrower, Devian, Necrophobic and many more! An absolute Swedish death metal product of quality and one of the best in their genre in fact!

The new album:
"Darkness Unbound", Demonical's fourth full-length album is another step forwards on the bands career, becoming a natural development from the highly acclaimed "Death Infernal" album. With this new release the band solidifies their status as one of the best Swedish death metal bands of today's days!
Demonical have already proved that they are a natural ever-growing force, instead of limiting themselves to a bunch boundaries in the rough death metal tradition, they re-invented the classic old-school sound and upgraded it into a way more powerful, dynamic and developed format. Combining in perfection the slower and the more aggressive components deep into a darkness unbound formula! Reminding what Hypocrisy done in the past, but without overdoing with the melodies or synth usage, expect nothing else but brutal and primal death metal here!
This album counts also with some great cover-artwork done by Chilean artist Daniel Valencia (Fenomeno Design, e.g. Blut aus Nord, Merrimack, Manes, etc..)
"Darkness Unbound" crowns Demonical as one of the kings and best references on Swedish death metal, without a doubt this album sure sets a mark in Swedish death metal history!

Production and band members:
I must say that the recordings and album production done over the Necromorbus and Wing Studios by Mr. Widgren and the band is a perfect fit to the sound being created by Demonical, darkened enough to keep the old-school vibe and clean enough to keep the sound to elite levels, a smashing work here on these camp!
Demonical members are no strangers to death metal and they play it with a deadly formula and identity! Sverker Widgren is already a damn well known producer and singer around the extreme metal world, his vocals are powerfully enraged and the best fit to the bands current sound, Mr. Widgren is in fact another genius upon Swedish death / black metal scene! Martin Schulman who also plays in the reborn Centinex, gives the band some ever-present bass kick-ass sound. The guitar work done by Johan Haglund and Daniel Gustavsson sure give the band all the right dose of ear-slashing brutality and melody, all combined in the right proportions! The new drummer Ämir Batar has surely contributed on this album with some of the best and most dynamic drum performances in a Demonical album!

Album tracks and highlights:
The whole album is an authentic discharge of old-fashioned death metal, from the darkly spawned introduction "Darkness Unbound" forwards, Demonical unleash Hell with outstanding tracks like "The Order", "An Endless Celebration" or "Contempt and Conquest". Straight forwards and direct, these unbounded dark melodies really put the band on top of what is being done over Swedish Soils, an authentic Hell-raid of Scandinavian heaviest artillery! "King of All" gives you a chance to breathe once again in a well balanced heavy track, a slower delight to the already tortured ears! Quickly follows one of my own favourite tracks of the album, it goes by the title of "The Healing Control", a damn killer track with all the right balance of brutality and melody, all of this with a very own Swedish essence/vibe into... brilliant!
No-retreat, no surrender... the "Hellfire Empire", "Words are Death" and "Deathcrown" follow with devilish full-force, a damn aggressive track-pack that spares no ears with it's brutality, a massive and straight forward annihilation in form of music! Without a warning you face the "The Great Praise" that ends up the album with a pitch-black decadent apocalyptic darkness, a slower track that couldn't fit better at the end of this "Deathpiece" of Swedish art! As bonus on the digipack version of "Darkness Unbound" the band added "World Beyond" (Kreator cover) and the re-recorded "Burned Alive" track... so what to say? Two great additions to an already excellent album!

Epilogue:
In all "Darkness Unbound" reveals Demonical as one of the best death metal bands in Scandinavia, their identity and "know-how" sure detach them from today's days monotone extreme metal.
With this album Demonical have been, without any doubts, crowned as kings of Swedish Death Metal darkness! This album is a must-have release for any adept of Swedish death metal and death metal in general, without a doubt one of the best and most powerful death metal pieces of the year 2013! So what you are waiting for?! Go and get this Demonical elite extreme metal creation!

Hell-spawn darkness unbound rapes their holy flesh, rotten and decayed, the heavenly disciples lay dead at the apocalyptic fields of slavery! Raise your hammer and crush all the false gods!