Here we are to present and review one of the best extreme metal albums for the year 2014, its goes by the title of "Conjuring the Dead" and it's the new masterpiece by the Austrian Kings of Death Black Metal brutality BELPHEGOR!
Reinventing their supreme death black metal art, Belphegor present here one of their most brutal and extreme pieces to the date, a diabolical blast that shall NuKe you from this earth.
The band has managed to upgrade their sound into a new level of brutality and sickness. Rotten and Demoniacal their sound captures your ears attention from the beginning to the end of the new album!
Belphegor return sick as fuKK and twice as ugly and blaspheme! A nuclear holocaust upon the listeners ears... a feast for fans of bands such as Morbid Angel, Incantation, Hate Eternal, Deicide, Behemoth, Mayhem and more!

...if Sathan has a weapon of mass destruction, Belphegor supreme death black metal art is without any doubt the most brutal ones! Conjuring the dead upon this maggot infested siKK demented world! 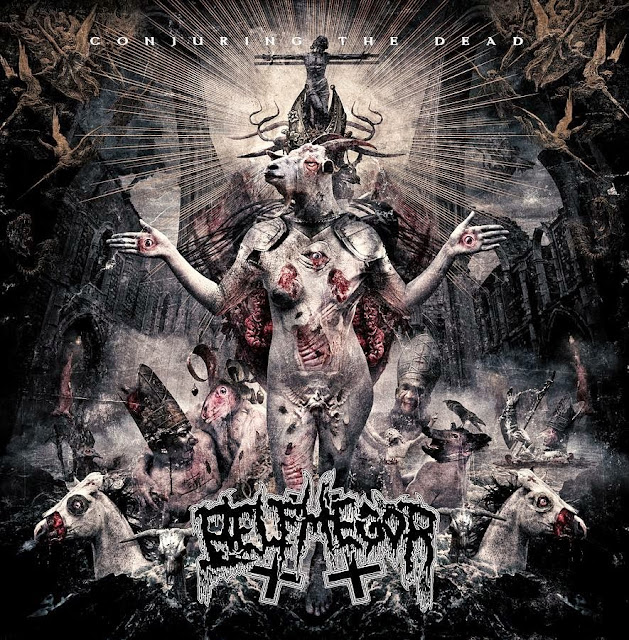 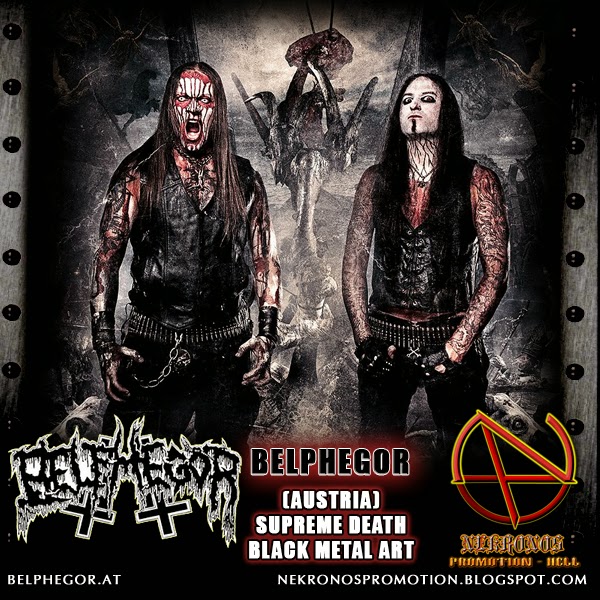 "(...)Dancing in a ring – bite marks on their skin
Whipped in centre of fire – cold cocks up their ass
Fornication – 666
Feast upon the dead
FLESH, BONES AND BLOOD (...)" BELPHEGOR - "Flesh, Bones and Blood" - "Conjuring the Dead"

The Band:
Belphegor have emerged upon this maggot infested world in the year 1993. By then an unrepentant, blasting war machine had been born upon this extreme Metal universe!
Since that time, their only remaining founding member Helmuth Lehner, that always been surrounded by top skill musicians, has been unleashing true infernal metal hymns one after the other, all this in more than twenty years of existence!
The band has always been Improving their so called "Supreme death black metal art"! Great examples of this ever-growing demolishing force are the highly acclaimed brutal masterpieces such as "Lucifer Incestus", "Goatreich Fleshcult" or "Bondage Goat Zombie", among others.
Stagnation means death!... and the band sure takes it literally. After the release of the critic acclaimed "Necrodaemon Terrorsathan" album back in the year 2000, the band has been rising to the top of what has been done on death black metal universe, this album sure has set a mark that catapulted the band towards elite levels, allowing them to sign with one of the world biggest Metal labels Nuclear Blast in 2006!
Belphegor's unholy feast of flesh, bones and blood is an banquet for adepts of bands such as Morbid Angel, Incantation, Hate Eternal, Deicide, Behemoth, Mayhem and many more!

The new album:
"Conjuring the Dead" reveals Belphegor on their darkest and sickest form! The bands supreme death Metal art has been reinvented and proving that they sure have allot more to give their fans than just stagnant brutality. The band has been constantly upgrading their De(ath)structive sound through the years, creating with it, some of the most twisted and blaspheme form of extreme metal, all this without losing their own identity and wicked apocalyptic charisma.
Reinventing an already polished work of art is a hard task but with this new album Belphegor have managed to bring some damn well fitting new elements to their already fatal formula! Nuking away any adverse criticism towards this new album changes! A black winged torment to some Belphegor puritan adepts, but a needed upgrade to the bands nuclear warfare!

Production and band members:
I sure must say that the work done over Mana Studios (US) by the extreme metal genius Eric Rutan (Hate Eternal, ex-Morbid Angel) is beyond amazing! Here everything is loud and clear... I am quite sure that the brutal ending result will please any extreme metal adept!
The bands main musical structures and quintessence remains the same, yet in the other hand some changes are to be expected on the vocals, here Helmuth is responsible for this new formula, sounding way more natural, clean and sickly organic, a corrosive vocal upgrade that fits perfectly on the bands actual sound! A step forwards in the bands long career!
Helmuth guitar melodies, brutal leads and rhythms from hell allow you to identify Belphegor in each and every track, it's outstanding how a band manages do so without repeating themselves!
Serpenth bass presence is huge, giving in each song a powerful and constant kick in your twisted heart! Marthyn dynamic and top skilled drum work is about brilliant, his skills are a perfect fit to the demanding Belphegor almost "beyond-human" drum task!
The incursion of some female vocals are fitting awesome on Belphegor brutal sound, mostly screams, yells, etc... damn siKK as fuck! Same about some guest vocals done by no others than Glen Benton (Deicide) and Attila Csihar (Mayhem). The band also added some effects, samples as well as classical melodic elements that sure fill up the sound with some enriching twisted deviance!

Album tracks and highlights:
"Conjuring the Dead" is a top quality discharge of death black metal so it's hard to define highlights on it! The new album works indeed pretty much as a whole!
Tracks like "Gasmask Terror", "Black Winged Torment" and "Legions of Destruction" (That counts with the guest vocals of Glen Benton and Attila C.) reveal Belphegor in their most traditional apocalyptic brutal form! In the other hand, slower yet powerful tracks like "Conjuring the Dead" and "Flesh, Bones and Blood" have that decadent, corrosive and twisted sick sound that brings the needed equilibrium to the album.
"In Death" is in fact a track that detaches on this new album, it brigs out a surprising and refreshing thrash metal bad-ass vibe! A proof that Belphegor essence lays on their constant developments instead of decaying stagnation! "The Eye" is an instrumental track that takes us back into Marquis de Sade glory days with classical music and twisted deviance!
Dark years of bewitched experience upon the extreme metal world allows the bands to find the equilibrium among pestilence, tracks like "Rex Tremendae Majestatis" or "Lucifer, Take Her!" / "Pactum In Aeternum", have a bit of everything from melody to brutality in a dynamic twisted structure! Ending up this nuclear holocaust in chaos and destruction!

Epilogue:
In all "Conjuring the Dead" is one of the most brutal and straight-forwards albums of Belphegor. It has all the best elements that the band has got us used to and allot more! Proving once again that Belphegor are without any doubts a diabolical death black metal unstoppable force! This musical nuclear holocaust is in fact one of the best extreme metal pieces for 2014!
"Conjuring the Dead" is a deviant PestApocalypse upon the listeners ears, a torment to any holy standard, an untamed darkness who finds no boundaries... in all this is Belphegor! The Diabolical Necromantic Kings conjuring the dead from this maggot infested siKK demented world since 1993!
If Sathan has a weapon of mass destruction, Belphegor supreme death black metal art is without any doubt the most destructive ones!