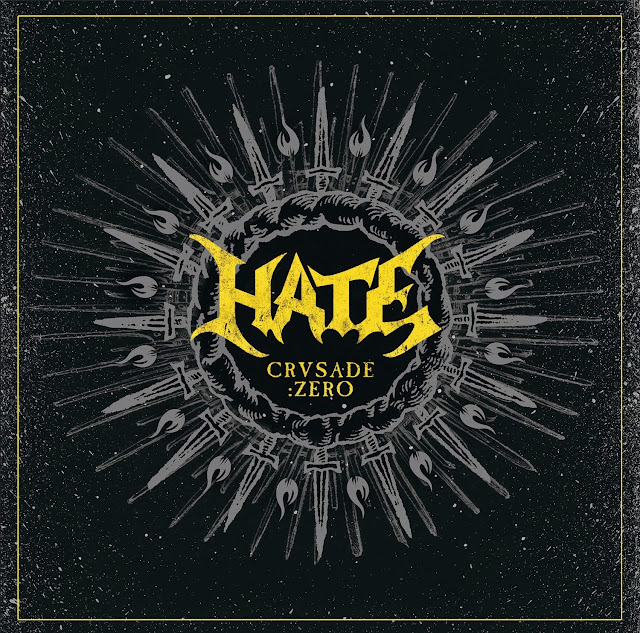 - Recorded, produced and mixed at Hertz Studio in Białystok, Poland with Wieslawski Brothers handling production duties.
- "Vox Dei" and "The Omnipresence" mixed by Kris Wawrzak at Efektura Studio in Warsaw, Poland.
- Samples and synthetics by Michal Staczkun with the assistance of Atf Sinner. 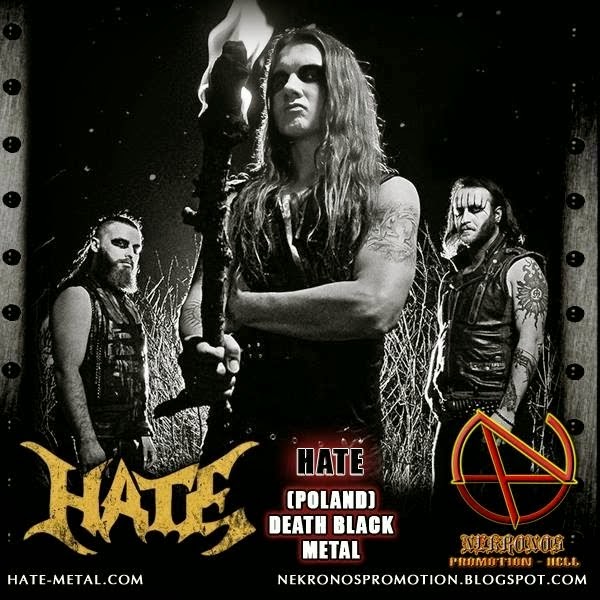 "(...)The crusade is nothing but failure
I am death, a plague to ensure thy fall
Shines the light on your life of agony

HATE blaspheme dark death metal leviathans are back with a new masterpiece! "Crusade:Zero" is without a doubt one of the best extreme metal albums for 2015!
The band has been established in 1990 in Warsaw Poland by the guitarist and vocalist ATF Sinner. HATE has always been the essence of extreme and unholy metal, they sure had tremendous importance on the forging of the Polish metal scene in the nineties, yet they still continue to influence a countless number of bands these days, both old and new!
The band has now return with a new album after some troubled times including the death of their former bassist Mortifer in 2013 during the tour with Hypocrisy and the departure of their drummer Hexen. Quickly after this events the band stepped out from this darkest personal period with the most creative and powerful release to the date! For that goal to be achieved the band has improved their darkest sound in every aspect. Pavulon outstanding dynamism and powerful drumming skills as well as the unchained musical talent of each member have lead the band into a complete new stage in their career, this without losing the bands essence and identity.

On "Crusade:Zero" the band has pushed their individual musical talent/skills to their most extreme point to the date! Must say that everything got better on this release, seems like a renewed black blood is running on their veins! Adam TFS voKills sound now even more like the voice of creeping Apocalypse, his words sound like the plague... corrosive, venomous and deadly! Pavulon elite drumming skills are a delight to the ears, giving the band a solid and renewed dynamism, thanks to that development HATE drums sound now even more powerful, tight and versatile! On this new album the bass is a constant presence, so much into the music that you can have here and then some well-fitting bass leads... also worth of notice is all that outstanding guitar (lead and rhythm) work, simply better than ever! The might of the riffs, the structural diversity as well as catchy melodies make this album memorable, not to forget about the solos who dare to catch sometimes that special Heavy Metal vibe, taking the sound way beyond any limits of extreme metal! In few words I can only say that HATE are an allegiance of damn talented musicians and they sure aren't afraid to show it on this new release! Leaving any extreme metal boundaries behind, the band has reached a peak of (Metal) creation! HATE is the (only) LAW!

"Crusade:Zero" album grows on every song till it's end, an apocalyptic crescendo of the darkest death metal form!
Eerie sounds from the massive dark interstellar Universe introduce you to this majestic journey upon extreme metal blaspheme art! As the album evolves and darkness rises, some tracks start causing a higher impact, songs like "Leviathan" that combines in perfection all the best black and death metal elements on a iconic powerful track! "Hate is the law" as the name inspires is a colossal monument to the bands identity... fierce and darkly epic! "Valley of Darkness" is one of the best tracks of the album, containing also some of the best guitar solos into. This track as well as the entire album carry within its lyrics a very strong and mind liberating message! "Valley of Darkness" becomes one of the best examples of the band's forged new sound! "Crusade:Zero" title track is an apocalyptic epic extreme metal assault... technical, dark and deep! To finish the album at best we have two timeless epic hymns, they are "Rise Omega the Consequence" and "Dawn of War"... an authentic modern Polish death black metal Armageddon followed by a spooky dark cosmic domain outro! As bonus have another great track worth mentioning, it goes by the title of "The Reaping" and it brings out some death black trash metal decadent aura among it!

In all, "Crusade:Zero" is a must for any extreme metal fan. Rebel, blaspheme, dark and intense this opus dares to be among the best extreme metal albums forged to the date!
With the release of this album the band couldn't give a better tribute to honour their fallen brother Mortifer!

Deadlier than Death herself, Blackest than Black, HATE have been crowned the Leviathan Kings of Extreme Metal!

"Set fire to Icons of religious fanaticism and slavery! Start a new age from Zero, a cursed Crusade for a new Era of a Mankind reborn from the ashes of Human Armageddon! Another rising Empire of Man cursed to fall once again in the end!" RüPä - NeKronos Promotion HELL