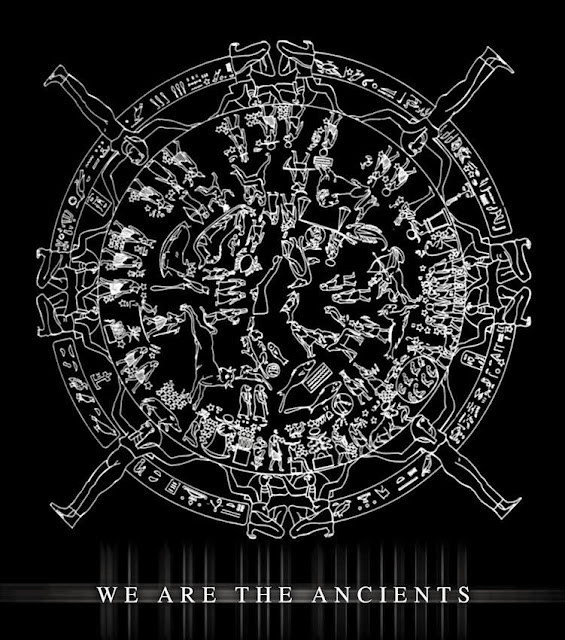 Here we are to present and review the latest split release from the Polish bands Empheris, Purifier, Conquest Icon, Wraith and Necroist that goes by the title of "We are the ancients", a damn bad-ass old-school black death metal piece not to be missed by fans of bands like Marduk, Deicide, Obituary, Watain, Horna, Blood Red Throne, just to mention few!
Expect nothing but brutal and old-fashioned extreme metal, straight forwards and "in-your-face"! This allegiance of underground Polish black death metal daemons has unleashed furious hymns for the ancient gods of metal! Expect some uncompromised black death metal art and forget that extra clean production, these devilish critters sound is just like the older wines, the older the better... yet all with good quality sound, don't you expect any analogue nonsense on this awesome underground piece!
Ancient wisdom unveils the immensity of human kind; unchained and untamed we reach realms beyond our comprehension, always seeking for the meaning of our existence and beyond!

Here is the Tracklist for the split album:
Empheris + Purifier + Conquest Icon + Wraith + Necroist - "We Are the Ancients" - CD 2013 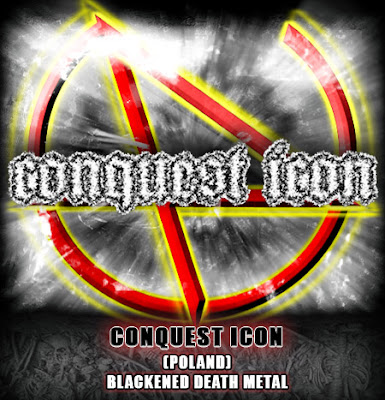 The bands:
CONQUEST ICON death black metal band from the Polish underground titan Andy Blakk (ex-Pyorrhoea, Empheris, etc) have unlashed their new split CD "We are the Ancients" together with their underground war-brothers Empheris, Purifier, Conquest Icon, Wraith and Necroist. On this participation, Conquest Icon unveil their most recent sound, that is an upgraded version of what "Hellspire" debut album has unveiled, overcoming it on maturity, aggression and power! Ronve has surely given the band a much better vocal dynamism which also allowed the band to move forwards! For those unfamiliar with the bands let me tell you a bit more about them all:
Conquest Icon: have been founded in late 2009 by Andy Blakk and Empherion (see also Empheris), since the beginning the band has been improving their blackened death metal, now with a complete line-up they are ready to unleash hell in and outside stages! Since their foundation the band has surely been noticed by their outstanding and old fashioned death black metal, a band to follow with all attention for future endeavours!
Empheris: have been formed in early 1995 and they play an old fashioned black death metal that has been their trademark since early times!
Wraith: are an old-school death metal band from members of Empheris that has been formed in 2010.
Purifier: were founded in 2007 by Ronve (see also Conquest Icon) and Empherion. Their sound is a old fashioned black death metal!
Necroist: were formed in early 2011 by Empherion and Nymphobh, they play some ancient black death metal sound, like the band states, it derives its inspirations from wide range of music and non-music influences. It sounds like a scream of Elvis Presley in the deepest quadrants of beyond the space and time…

The new split album musically:
Once you have a split release with many bands like on these one, you will probably fear a musical dispersion, yet on "We are the Ancients" you will find a musical uniformity, not only because the most of the bands share members with each other but by the fact that the bands sound is damn compatible, giving this split-CD a special dynamism and the right dose of contrast, all this without having any of the bands sound detaching too much from the previous one and so on! A great combination of black and death metal, all in a underground and old-school fashion style! While bands like Empheris, Purifier and Necroist are closer to black metal, on the other hand bands like Conquest Icon and Wraith are closer to death metal, still in a very own blackened way!
I am sure that fans of bands like Deicide, Obituary, Belphegor, Blood Red Throne, Vomitory, etc. would be delighted with the death metal approach, yet in the other hand, fans of bands like Marduk, Watain, Horna, Tjuder, etc. would be pleased with the black metal vein on the participating bands! In all this is a diabolical piece that shall please extreme metal fans in general and even more if you are fed up of crystal clean sound and over-produced releases. This one sure keeps the essence of the ancient metal times, all with a good quality sound, maximum power and fearsomeness!
The album recordings at KPD / NAD / ABH studios and production by Andy Blakk, Empherion and Imp are just about great, keeping the right underground sound for this great underground piece of extreme metal!

The album highlights:
Like I said before this album is quite uniform and it's hard to pick up highlights on such a great blackened death metal split album, yet I need to mention some tracks that may in a way or another pierce your ears with an higher impact and stubbornly keep you listening to them on and on!
Tracks like Empheris "Nos es Antiquitas" or "Necrocosmosis" are a perfect expression of the bands virulent and terrorizing black death metal, brutally wicked and fearsome. Even in a higher level you have the Conquest Icon contribution with tracks like "I Annihilate" or "Remnants" simply top quality blackened death metal in a addicting old-fashioned way, I am sure it shall give you loads of good flashbacks from other extreme metal legends, yet without losing their own identity. Tracks like Wraith "And Thou Shalt Decay" and "Defiance Tastes Like Life Itself" unleash hell like a Beast out of the infernal pits, brutal and destructive work! Necroist "Trinity of Necroism" shall take you into a dark ride into darkest phantasmagoria, a great way to end up this album, exploring blackest landscapes of death and horror!

The Epilog:
In all "We are the Ancients" split CD is a damn outstanding piece that will not disappoint any underground death and black metal fans. This is for sure a great extreme metal album to feature on your own collection. Every die-hard old-school fan should own it!
This split CD proves that the Polish Underground is producing great sound and keeping the ancient spirit of extreme metal alive! I am sure you will find this release a tormenting pleasure to the ears!
Dark wisdom never forgotten, like an epic darkened magic that allowed Civilisations to prosper! Mankind falls to arise once again... we are the Ancients!